Germany ran up their biggest victory yet in their World Cup qualifying campaign, beating Turkey 8-0 to add to 7-0 wins against Bulgaria and Israel.

With five wins from five, 28 goals scored and just one conceded, Martina Voss-Tecklenburg’s team are well on their way to qualification for the 2023 World Cup in Australia and New Zealand.

But the performance – and the return of three Bayern Munich players – is also set to increase competition for places in the squad ahead of next summer’s European Championships in England.

“Today was good in many, many areas,” summed up Voss-Tecklenburg simply. There was little more to say. 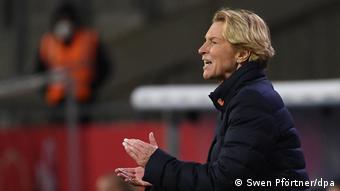 Germany took the lead in the opening minute in Braunschweig courtesy of an own goal from Turkish defender Kezban Tag. Further goals from Lea Schüller (7′ 11′ 67′), Jule Brand (62′), Laura Freigang (74′), Sjoeke Nüsken (80′) and Klara Bühl (88′) followed in front of 2,583 spectators – and it could have been more were it not for some profligate finishing.

“You could see that we’re all up for it on the pitch and we all want the ball,” Nüsken told broadcaster ZDF. “The goals were all well worked, and we want to continue that against Portugal.”

Germany travel to Faro on Tuesday to face Portugal, who are two points behind them in second. Only the group winners qualify directly for the final tournament, with the runners-up going into a playoff.

“Everyone can see that we have potential and that we have quality,” said Viss-Tecklenburg. Her team are looking to improve on their 2019 World Cup quarterfinal exit at Euro 2022, and they have been boosted by the return of Bayern Munich trio Klara Bühl, Lena Oberdorf (who started) and Marina Hegering (a second half substitute).

In the absence of playmaker Dzsenifer Marozsan (infection), Eintracht Frankfurt’s Sjoeke Nüsken wore the number ten and, together with Sara Däbritz (PSG) and Lina Magull (Bayern), dictated Germany’s attacking play – but they will face a much tougher test against Portugal.

EPS 95 pensioner? Now pension to get credited in bank accounts on this day of the month – Check details